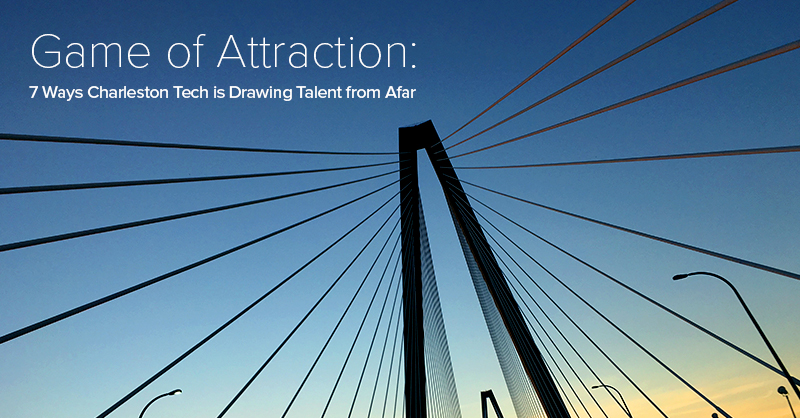 The growth of Charleston’s technology scene continues to inspire our community, business leaders, and the media as it emerges to compete on a national level. While Charleston is only the 76th largest metro area in the country, it ranks 18th in advanced industries – and the tech community is a huge reason why.

To continue fueling this success, Charleston will need to grow its STEM-based workforce and fill up to 25,000 jobs over the next few years – that’s a lot of tech!

At Catch, we focus on talent attraction for growing technology, engineering, and manufacturing companies, and telling those employee stories through creative employer branding. We believe that talent attracts talent, and customers too. We’ve spent our careers in the Charleston technology scene, and are excited to continue being part of its growth and success.

But with only so much talent to go around here in Charleston, there is a strong need to lure qualified candidates here from other markets. We specialize in doing just that, but we can’t do it alone – and we don’t have to! Charleston itself is already drawing the talent here.

Here are 7 ways Charleston is building its tech community one import at a time!

The Vibrant Tech Scene Itself

A handful of early businesses laid the foundation of tech here in Charleston for the rest of us to follow, and blazed that wide open trail of success. Now with multiple large tech companies and dozens of startups, the opportunities feel endless – especially for those looking to relocate here!

The Charleston Regional Development Alliance knows a thing or two about growing this region, and in 2015 launched Charleston Open Source, an initiative to attract technology talent from other markets like Austin, Nashville, and Seattle. They kicked the campaign off locally, and will be expanding outward next year – keep an eye open and share it with your friends.

As Post & Courier reporter Allison Prang recently wrote, the acquisitions of SPARC and PureCars have proven to be positive exits for our tech community. Not only did they help launch new ventures like Catch Talent, Teamphoria, Stre.am, and Xoomlane, they poured investment capital back into our startup scene. More exits and capital mean more startups, which makes moving here to join one an easier decision.

Speaking of exits, along with them comes entrepreneurs, supporters, and VCs like Silicon Harbor Ventures and Third Prime Capital ready to take their funding and get in early on the next big idea. Charleston is also seeing an influx of retirees, East Coast refugees, and people looking for a developing scene to invest in… and we are it!

Light Fuse and Get Away: Accelerators!

When you have an organization like The Harbor Entrepreneur Center running cohorts at The Harbor Accelerator a couple times a year, a lot of startups, entrepreneurs, and interests are going to come your way. John Osborne and his team have put a lens on startups here in Charleston, and helped a bunch of great ideas become thriving businesses. And with incubators like the Charleston Digital Corridor and coworking spaces like Holy City Collective, Launch Pad, and Local Works Charleston, the infrastructure is there too.

There’s no shortage of amazing startups, ideas, and personalities here in the Charleston tech scene, and outlets like Silicon Harbor Magazine, Startup Grind, Tech After Five, Women in Tech, and NextPlex Charleston are doing a great job bringing it all together and promoting the cause. Then there’s Dig South, who is putting Charleston’s startup scene on the national map. All this effort means more eyeballs, and more techies headed our way!

I mean who wouldn’t want to move here? Between the beach, downtown, fishing, golf, the beach, the weather, the attractions, the restaurants, and the beach, Charleston has everything you need in a place to live and work. Plus there’s the beach… It’s a no brainer.

Charleston is doing all the right things to attract the talent we need to the region, and you can certainly  help. After all, Winter is coming! Share this post with your techie friends up North,  or anywhere for that matter, and tell them why you think Charleston should be their next destination.