Twas the Night Before DIG SOUTH 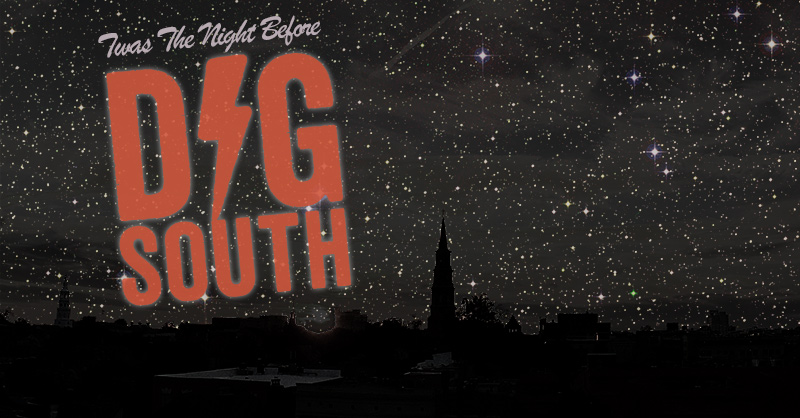 With Charleston’s preeminent interactive festival upon us, the Catch crew is excited to be rolling into DIG SOUTH for the first year as a company. We’re pumped for the shindigs, networking, and sessions, and honored to be speaking on the “How to Reel In Top Talent panel as well as setting up shop at the DIG-A-Job Marketplace – be sure to some see us!

We’ve packed up our swag, grabbed extra business cards, and are ready to roll into the Galliard tomorrow. The only thing left to do is gather our young ones tonight and tell that classic tale we’ve all heard for years… we hope you do the same.

Twas the Night Before DIG SOUTH

Twas the night before DIG SOUTH, when all through CHS,
Not a techie was tweeting, with trackpad or mouse.
The lanyards were hung in the Galliard with care,
In hopes that Gary Vee soon would be there.

The attendees were nestled all snug in their beds,
While visions of keynotes danced in their heads.
With Sunny making calls, and Nicole sending emails,
The team had taken care of all the details.

When out on King Street there arose such a clatter,
I checked the #DIG2016 hashtag to read all the chatter.
Out came my phone in a flurry and flash,
And Twitter was buzzing with the impending bash.

The feed told the story of tomorrow’s big show,
of sessions and parties for those in the know.
When what should appear from downtown’s endless cars,
But a pimped-out Uber, and some big brand rock stars.

With a crafty organizer, super connected some say,
I knew in a moment it must be Stan Gray.
More numerous than ever his whole network came,
And he whistled, and shouted, and called them by name!

“Now Facebook! Now, Twitter! Now, Google and HubSpot!
On, TechCrunch! On, Yik Yak! Adobe and Snapchat!
To the back of the stage! To the front of the hall!
Now tweet away! Blog away! Snap and stream it all.”

And then, with a ring tone, I heard in the lobby,
The chatting and laughing of everybody.
As I drew in my head, and was turning around,
Down the center aisle Stan came with a bound.

He spoke of Content, Contacts, and Capital,
And how these 72 hours would be most valuable.
The Pitches, the Shindigs, and MashUps, and Bashes.
As iPhones lit the room with a shower of flashes.

In the midst of the Festival, we’ll Dig-A-Job,
And network with every Tim, John, and Bob.
Blue Acorn, PhishLabs & SPARC will offer great swag,
And to land a new dream gig is certainly no drag!

Stan opened his Macbook and gave the signal,
And welcomed us all to this year’s festival.
But I heard him exclaim, as he closed it up tight,
“Happy DIG SOUTH to all, and to all a goodnight!“