Be Careful What You Ask a Stormtrooper 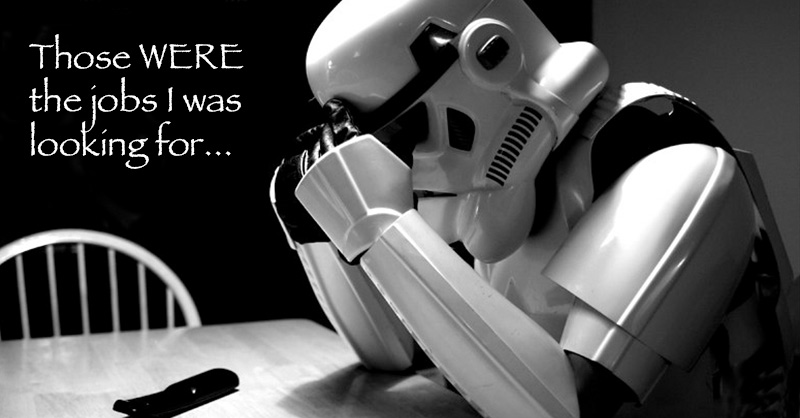 With The Force Awakens hysteria in full gear, I can’t help but think about the Empire and its tremendous recruiting and employer branding engine (which means I’m either a huge Star Wars or Recruiting geek… or both!) With bleak work conditions, cumbersome uniforms, and hazardous assignments, Darth Vader and his leadership team were consistently able to recruit and retain thousands of Stormtroopers – they clearly knew what they were doing!

When the rebellion destroyed the second Death Star and crushed the empire, a lot of Stormtroopers were left unemployed and looking for work. As they hit the interview circuit, I imagine many of the hiring managers they spoke with had an abundance of curiosity about their previous employer, job, and lives.

Even in a galaxy far far away, the temptation to get personal during an interview can prove costly if you ask the wrong questions, as some of this information could be seen as discriminatory. The EEOC was put into place to protect candidates from this, even if they have a blaster at their side.

What the Heck is EEOC?

The Equal Employment Opportunity Commission, or EEOC, is a commission put in place in order to provide specific protection from discrimination in hiring certain protected classes like religion, age, race, and gender. Asking interview questions that are related to these classes can damage a company’s reputation and bottom line, as lawsuits can follow if a candidate is turned down.

The best rule of thumb when it comes to asking interview questions is:  If it’s not job related, DON’T ASK IT! If you’re a recruiter, hiring manager, of even a candidate, it’s good to know what these protected classes are and how to spot questions that infringe upon them.

In the spirit of the season, or at least the premier of The Force Awakens, here some examples of real questions asked to Stormtroopers and the protected classes they infringed upon.

So whether you’re interviewing a Stormtrooper or Systems Admin, a Jawa or Java Developer, or a Jedi Master or Scrum Master, be careful what you ask – you don’t want to end up in the Sarlacc Pit. May the force be with you!